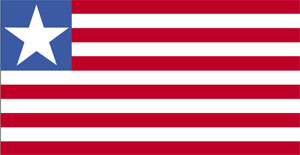 Terrain: Three areas–Mangrove swamps and beaches along the coast, wooded hills and semideciduous shrublands along the immediate interior, and dense tropical forests and plateaus in the interior. Liberia has 40% of West Africa’s rain forest.

Monrovia is the capital city of Liberia in West Africa, it’s located on the Atlantic Coast. Over one million people live in Monrovia making it Liberia’s most populated city. Monrovia was founded in 1822, named after US President James Monroe, who was in favor of re-settling freed African-American slaves. As the city grew during the next century it was divided into two sections, one for the returning African-Americans and the other for the existing local population. The city continued to grow as more people moved into Monrovia from the countryside.

You can fly to Monrovia’s International Airport via Belgium on Brussels Airlines, or via London on Astraeus Airlines. Regional airlines include Eylesian Airlines and Kenya Airways. Royal Air Maroc & other airlines.

Restaurants and Clubs
Sundowners are popular at Mamba Point Hotel, Lebanese cuisine can be tried at Beirut and the seafood is fresh and delicious at The Anchor. Liberian local dishes can be found throughout the city of course, Auntie Nana near the Cathedral, is a good lunch bet as is La Pointe Restaurant. Good night spots include La Noche Bar and Deja Vu.

Getting Around
Taxis are the best way to get around town.

There are 16 ethnic groups that make up Liberia’s indigenous population. The Kpelle in central and western Liberia is the largest ethnic group. Americo-Liberians who are descendants of freed slaves that arrived in Liberia early in 1821 make up an estimated 5% of the population.

There also are sizable numbers of Lebanese, Indians, and other West African nationals who make up a significant part of Liberia’s business community. The Liberian constitution restricts citizenship only to people of Negro descent; also, land ownership is restricted by law to citizens.

Liberia is traditionally noted for its hospitality and academic institutions, iron mining and rubber industry booms, and cultural skills and arts and craft works. But political upheavals beginning in the 1980s and the brutal 14-year civil war (1989-2003) brought about a steep decline in the living standards of the country, including its education and infrastructure.

Liberia has a bicameral legislature consisting of 66 representatives and 30 senators representing the fifteen (15) political sub-divisions of the country.

The legislature, executive and judiciary are three separate yet coordinate branches of government, each with specific constitutional functions, duties and responsibilities. This arrangement provides for a system of checks and balances of power among the branches. Legislative institutions are complex and multifaceted organizations. These institutions are considered the principal forum for debate on public policy issues and a place for compromise and consensus building. Moreover, legislatures reflect a broad spectrum of the country’s political opinions. They are central to democratic government, as long as they remain visible, accessible and accountable to the citizenry.

The Liberian economy relied heavily on the mining of iron ore and on the export of natural rubber prior to the civil war. Liberia was a major exporter of iron ore on the world market. In the 1970s and 1980s, iron mining accounted for more than half of Liberia’s export earnings. Following the coup d’etat of 1980, the country’s economic growth rate slowed down because of a decline in the demand for iron ore on the world market and political upheavals in Liberia. Liberia’s foreign debt amounts to about $3.5 billion.

The 1989-2003 civil war had a devastating effect on the country’s economy. Most major businesses were destroyed or heavily damaged, and most foreign investors and businesses left the country. Iron ore production has stopped completely, and Liberia cannot profit from timber and diamond exports due to UN sanctions. Its few earnings come primarily from rubber exports and revenues from its maritime registry program.

As the second-largest maritime licenser in the world–with more than 1,800 vessels registered under its flag, including 35% of the world’s tanker fleet–Liberia earns some $14 million annually from the flag registry. There is increasing interest in the possibility of commercially exploitable offshore crude oil deposits along Liberia’s Atlantic Coast.

Liberia is a member of ECOWAS. With Guinea and Sierra Leone, it formed the Mano River Union (MRU) for development and the promotion of regional economic integration. The MRU became all but defunct because of the Liberian civil war, which spilled over into neighboring Sierra Leone and Guinea. There was some revival of MRU political and security cooperation discussions in 2002.

With a new, democratically elected government in place since January 2006, Liberia seeks to reconstruct its shattered economy. The Governance and Economic Management Program (GEMAP), which started under the 2003-2006 transitional government, is designed to help the Liberian Government raise and spend revenues in an efficient, transparent way. Success under GEMAP and solid economic performance should result in Liberia being able to attract investment and begin rebuilding its economy.

Liberia is a founding member of the United Nations and its specialized agencies and is a member of the African Union (AU), the Economic Community of West African States (ECOWAS), the African Development Bank (ADB), the Mano River Union (MRU), and the Non-Aligned Movement.

Liberia’s Foreign Policy is firmly rooted in its political ideology of liberalism, democracy and capitalism. This foundation is copied after the pattern adopted by the United States of America from where the founding fathers of Liberia had come as ex-slaves and free men color. Generally speaking, the guiding principles of Liberia’s foreign policy has been the maintenance of national security and the preservation of the territorial integrity and sovereignty of the country, the promotion of peace and harmony based on the principle of non-interference in the internal affairs of other states, and unity in the national community based on the virtue of liberal democracy.The fundamental thrust of Liberia’s foreign policy objective before the Tubman era was predominantly the maintenance of national independence. Since the Tubman administration to date, the foreign policy objective of the country, in addition to the maintenance of national independence has been the devotion to economic, social and political development.Realistically speaking, Liberia’s survival as a state in the face of difficult challenges posed by colonial powers like Great Britain and France have been the skill and maturity with which her leaders conducted her foreign policy and foreign relations. Thus the mastery of the act of diplomacy has remained the hallmark, and one of the most credible achievements of Liberia in the comity of nations.

Available Legal Services for Recipients of the DACA Program

Consulate Office Hours
We are open to the public Mondays through Fridays 10:00 AM to 3:00 PM. We observe all Liberian and US holidays.