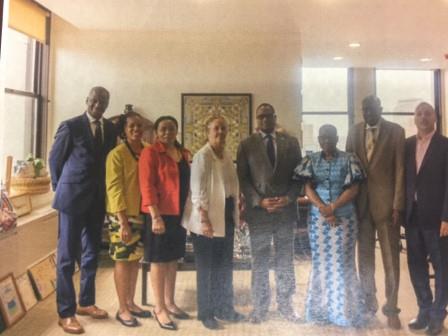 The Borough of Manhattan President Madam Gale Brewer on Thursday, July 6, 2017 hosted a meeting with Consul General Rudolph E. Sherman Jr of the Consulate General of Liberia along with three other Consul Generals from Gabon, Senegal & South Africa at her offices in New York City.

The meeting was held in furtherance of the objectives of joining collaborative efforts to unite African Immigrant communities in New York City; an initiative founded by Madam Brewer where the cares and concerns of immigrant populations are discussed and addressed in concert with leaders from immigrant communities.

During the conversation, Madam Brewer appreciated the diversity of perspectives and expressed optimism that the issues that affect each immigrant population can be addressed with the help of the African Consul Generals represented: Hon. Rudolph E. Sherman, Jr of Liberia, Hon. Yvonne Walker-Borobo of Gabon, Hon. Amadou Ndao of Senegal and Hon Thulisile Mathula Nkosi of South Africa.

According to the New York City’s Department of Planning, the African-born community is a fast-growing part of New York City populations with an increased percentage of 39% from 2000 to 2011.

The Consul General, Hon. Rudolph E. Sherman, Jr., and Staff at the Consulate General of the Republic of Liberia in…More

Consulate Office Hours
We are open to the public Mondays through Fridays 10:00 AM to 3:00 PM. We observe all Liberian and US holidays.